Located Downtown in Victoria’s Inner Harbour, the Black Ball terminal is a short walk from many of our hotel partners and major attractions. The Victoria terminal is located 2 blocks down from the Parliament buildings, across the street from Hotel Grand Pacific.

For drive-on passengers, the entrance is one block from the terminal building at the intersection of Oswego Street and Belleville Street. You will approach our ticket booth before being directed to a specific lane number. 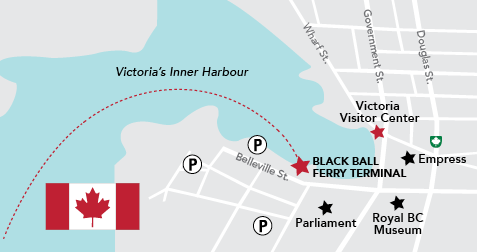 The Black Ball terminal in Port Angeles is located within walking distance from Downtown merchants, as well as providing easy access to the Visitor Center, parking facilities and major driving routes. From 101 West, drive into Port Angeles, turn right at Lincoln St, left on Railroad Ave to the Port Angeles terminal on your right.